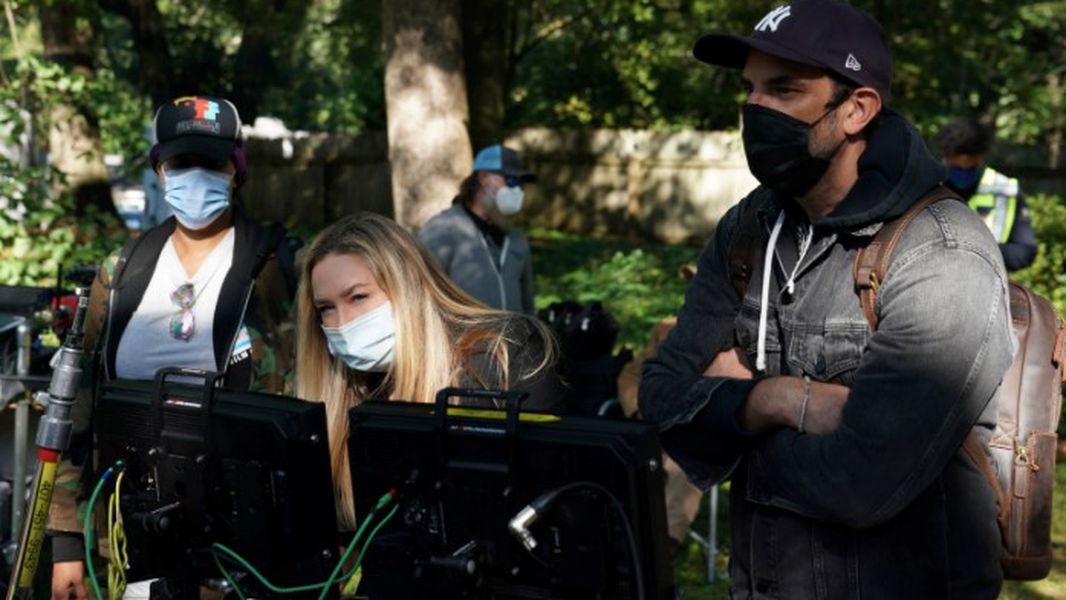 INTERVIEW: Elisabeth Röhm on directing ‘Girl in the Basement’

Lifetime for decades has feasted on a subgenre that became dubbed “women in peril” movies. Females are hunted, kidnapped, abused and murdered, usually by rapacious, jealous men. And the film titles are not meant to be coy but as descriptive as possible for the masses: “Baby for Sale.” “Newlywed and Dead.” “Stalked By the Doctor.”

This Saturday’s “Ripped From the Headlines” film “Girl in the Basement” is exactly that, and the film title describes the basic plotline to a tee.

Judd Nelson (”The Breakfast Club”) plays Don, an overly protective dad who is incensed that his rebellious 18-year-old daughter, Sara (Stefanie Scott), has a biker boyfriend and plans to travel the world as soon as she can. He discovers a secret bomb shelter downstairs left by a previous owner, and unbeknownst to his wife (Joely Fisher) and other daughter Amy (Emily Topper), he traps Sara down there for 20 years. He rapes her, and they have multiple kids. Eventually, she escapes.

It’s as icky as it sounds, but as many news reports and other movies have shown, these types of extended kidnappings do happen, most notably the real-life 2003 Elizabeth Smart case. Lifetime will even show a small documentary about real-life cases after the film airs Saturday night.

“Girl in the Basement” was shot in metro Atlanta by Atlanta-based production company Swirl Films.

Elisabeth Röhm, known for her time as an attorney on “Law & Order,” is well versed on “ripped from the headlines” story lines that the Dick Wolf show perfected on NBC. She is making her directing debut with this film and appears near the end as a nurse.

“I’ve wanted to direct for awhile,” Röhm said in an interview with The Atlanta Journal-Constitution. “When you are a female in this industry, you don’t see yourself in the director’s chair or other positions of leadership. It took me years to think, ‘Well, why not me? If not me, who?’”

It helped that she met Tanya Lopez, who is Lifetime’s executive vice president for scripted series and movie acquisitions.

“I think there was an awareness I like difficult hard dramas that are necessary and important to tell,” she said. “They offered me something that spoke to my soul. It was a perfect opportunity.”

Röhm said to have someone like Lopez watching over her was crucial for her development and confidence.

“Tanya is the sun, the mentor and the champion,” she said. “She’s a great collaborator. The day before my first day for ‘Girl in the Basement,” I was in the hotel. It was a Sunday. She called. Who has the time to call me on a Sunday who runs a studio? She does. She said to me, ‘I want to create this for you, so you have an entirely new career to go after. Just remember to have fun.’”

Naturally, the subject matter of this film meant fun wasn’t always in the equation, but she said she had a strong support system on set.

Röhm, from a director’s standpoint, chose not to gratuitously amp up the drama and keep it as believable as possible. It also helped to have Stefanie Scott playing Sara, the victim. Scott as Sara kept her rage and frustration largely internalized, so when it did explode, it felt more impactful.

“She was able to portray the survival in this character, that she has self-worth,” Röhm said. “Something about Stefanie is very solid inside, and somehow I could believe she’d be able to survive 20 years of imprisonment. She’s raw and has a capacity to show so much love.”

Röhm overcame the challenge of putting together such an emotionally fraught film in just 14 days of shooting. (The lovely home with the wrap-around porch in the movie is in Marietta while the basement was shot on a soundstage.) She wanted a clear but subtle contrast between the horrors of the basement versus the fake tranquility upstairs. It helps that Nelson played that Jeckyll-and-Hyde dad character with a scary, seething furor.

Naturally, Nelson off camera was “very funny, very charming,” Röhm said. “I had a huge crush on him when I was a teenager. If my 14-year-old self knew I would get to direct Judd Nelson in my first film, I wouldn’t have suffered so much in my 20s and 30s!”

She plans to work again with Swirl Films as well as Lifetime for future projects, both behind the camera and in front of it.

“Girl in the Basement,” 8 p.m. Saturday on Lifetime